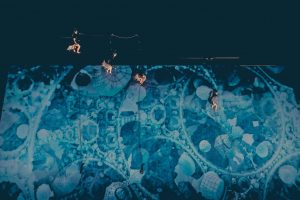 “New Forms in Mixdoor Performing Arts Practices” is a combined intercultural initiative, collaboration between art forms, artists and European countries (Hungary, Croatia, Poland, France, Greece). The need of a fresh audience approach led to explore different expressive means of artistic creation and underline their common ground. The process of research has determined the project’s main axis: the combined use of exterior public space and the indoor theatrical spaces. (Mixdoor = outdoor & indoor).
Our aim was to improve and bring up the various contemporary art forms, as well as connect people with different cultural background. The four disciplines of the projects were 1; juggling and contemporary circus 2; vertical dance, 3; music 4; 3D mapping and GPS-based human interface. We have made a performance structure with three stages, one outside and one inside performance linked to small, site-specific happenings.
Within the project the performers and professionals (visual, set design, technical etc.) have worked together with artists chosen at each performance venue. This means that there were two preparing phases. First the permanent crew was selected, during one-week-long workshops. They have created the show in Hungary. Then during the tour of the performance, in each country, new artists joined to the company. The workshops were organized in different countries. Hungary and Greece will dominate among the countries. The 2- week-long inspiration period took place in Elefsina, while the performance was created in Budapest, during a 6-week-long period. The created performance, called ItinaiR was presented (together with further workshops) in the partner countries.
ItinaiR is by nature, a site-specific creation, so each presentation consisted a unique event, inspired by and connected with the hosting environment. In each city different public spaces were connected with local sites of cultural interest (former industrial sites or cultural centres).”