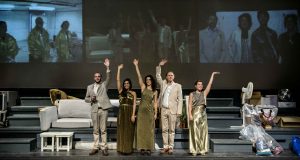 PHONE HOME aims to establish the model for a new form of creative collaboration and cultural exchange by bringing together community-based theatre work, new forms of international interaction and innovative audience participation. Based on a process of community-oriented artistic research, three theatres in three different European countries will create a performance to be watched simultaneously on their respective stages, while being interlinked via video-conferencing. The innovative use of Internet communication in the theatre corresponds with the topic of the project: Miscommunication on all levels with regard to refugees and migration. By recreating specific communication situations, inspired by real-life stories, the project aims to mold a subject of controversial international agenda into a thrilling theatre experience: How (not) to deal with the increasing amount of international migration. PHONE HOME is a co-operation project, which the Greek Highway Productions, the German Pathos Munich and the London-based Upstart Theatre will jointly develop and present in six phases:- Introduction: The three partners will agree on the specifics and make all preparatory contacts. – Research: Theatre practitioners will work with immigrants in each of the participating countries in order to give them access to the creative process and collect material. – Writing: The final performance texts will be developed collaboratively between the participating writers/directors. – Rehearsals: Actors in each country will work individually and collectively via videoconferences. – Performance: Simultaneously on each of the participating stages interlinked via Internet. – Completion: The entire process will be accompanied by extensive Internet based documentation and audience interaction. All materials will be edited and widely disseminated during this phase, which will also include all further post-production actions for the conclusion of the project (i.e. account auditing etc.)