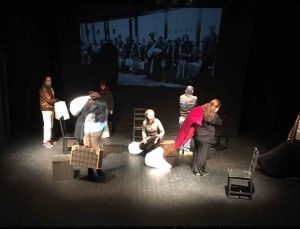 The main objective of the proposed project by the Kentro Spoudon Laikou Theatrou of Athens is to highlight the unofficial recent history of the European Union, and the important social and cultural messages it conveys for the peoples of Europe, through the medium of documentary theatre. Our main focus is on the immigration that took place within Europe after 1990 following the collapse of the ex-Soviet Union; and the effect this phenomenon had on the lives of families, for who, immigration often meant separation and disruption. The personal stories and testimonies of ordinary European families that experienced immigration in different circumstances and periods of their country’s recent history become the “raw material” for the FAIDRA play. The proposed project explores the genre of documentary theatre, using a wide range of expressive forms, such as acting, music, dance, puppets, miming and more; as well as new digital technology. Care is taken to produce a performance that can be staged by all partners jointly, but can also be transferred to different locations without high cost, to allow it to tour a wide range of countries and venues in Europe. The production of the FAIDRA play is supported by research, audience engagement plans and complemented by 6 international or national seminars for actors and related professionals, offering hands-on training on documentary theatre and related technologies; and by a touring international exhibition presenting documentation on the theme of the project. The latter will be also packaged as an “exhibition in a suitcase” addressing schools and the wider public. The joint production of the FAIDRA play will bring together actors and other theatre artists and cultural operators from 6 European countries: Greece, Italy, Sweden, Bulgaria Romania & Poland, supported by theatre companies, a theatre education institution and a research and consulting organization. The project will last for 2 years and will publish all its products on a dedicated website with social media links.